United Methodist Church of the Resurrection

Adam Hamilton is senior pastor of The United Methodist Church of the Resurrection in Leawood, Kansas, one of the fastest growing, most highly visible churches in the country. The Church Report named Hamilton’s congregation the most influential mainline church in America, and he preached at the National Prayer Service as part of the presidential inauguration festivities in 2013 and was appointed to the President’s Advisory Council on Faith-based and Neighborhood Partnerships. Hamilton is the best-selling and award-winning author of Creed, Half Truths, The Call, The Journey, The Way, 24 Hours That Changed the World, John, Revival, Not a Silent Night, Enough, When Christians Get It Wrong, and Seeing Gray in a World of Black and White, all published by Abingdon Press. Learn more about Adam Hamilton at AdamHamilton.org. 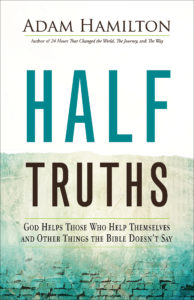